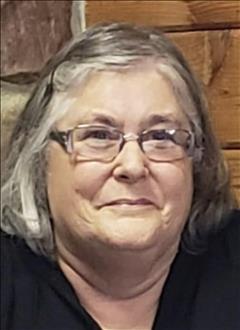 Susan M. Hicks, 70, of Spring, TX formerly of Fort Dodge, passed away on Thursday, November 19, 2020 at Mary Greely Medical Center in Ames surrounded by her children.
Graveside services will be 2:30 PM on Tuesday, November 24th at Memorial Park Cemetery. Her children will plan a celebration of life at a later date. Laufersweiler Funeral Home is serving the family.
Survivors include her children Sheri Mitsven of Cypress, TX, Dan Mitsven of Spring, TX, Kim Contreras (Barry Raymond) of Gowrie, step-daughters Nancy (Duane) Johnson of Waterford, WI, Sandy (Steve) Richardson and Janey (Mark) Marvin both of Fort Dodge, grandchildren Trevor, Treyton, Kayla, Kylan, Mariah, Shanna and Robbie, step-grandchildren Steve, Doug, Ashley, Scott, Jarred and Melissa, brothers Tom (Kathy) Scott of Fort Dodge, John (Linda) Scott of Hugo, OK, sisters Karen Scott of Denver, CO, Colleen Bratland of Fort Dodge, Kathy (Gary) Blumenshine of Loveland, CO, numerous nieces and nephews and her grand dogs Dolly and Pistol.
She was preceded in death by her husband Ray Hicks, parents Paul and Bernadine (Hanna) Scott, brothers Rick and Mike Scott, and grandson Cesar Ray.
Susan Mary Scott was born on August 21, 1950 in Fort Dodge. She was raised and educated in Fort Dodge and graduated from St. Edmond High School in 1968. Sue was united in marriage to Robert Mitsven and to this union there were 3 children born. The couple later divorced. She later married Ray Hicks and remained married until his death in 1996. Sue worked for Central Lab, Arrow Acme, St. Edmond School, and Trinity Regional Medical Center. She enjoyed her coffee and sitting outside watching the birds and wildlife. Sue also liked crocheting, reading, giraffes, and spending time with her family. The family finds comfort knowing that her coffee cup will always be full now.
Memorials may be left to the discretion of the family.

I'd like to extend my sympathy to Sue's family and to the Scott family. Sue was often our babysitter when my sisters and I grew up. We lived across the street from the Scott family on South 28th Street in Fort Dodge. So sorry to hear of her passing. With sympathy, Pam Christopher

"Ms. Sue" was just one nickname she picked up from the little family we have at LSC Student Life. And she quickly became a much loved part of that family. We loved having her around; her smile brought joy and she had a way of making you feel like the only person in the room. She gave you her - her attention, her smile, her compassion and love. She will be missed but she will also be remembered, always with fondness, as "The Manager of the Director".
Dan, you and all of your family, will remain in my heart and prayers as you deal with this heavy loss. I pray you find peace and comfort and find joy in the memories you shared with this wonderful woman.

Ms Sue was such a people-person: she was always joyful and a delight to be around! I am so thankful that our paths crossed during this journey and we were able to share lots of laughter. To Dan and the entire family, please know that she will be sorely missed, but her spirit will live on through you all! May the Lord continue to be your strength, peace, comfort, and love during this time and days to come.

Susan was a very caring person that made you feel like you were part of the family as soon as you walked in the door. I'm grateful she had 3 wonderful children to pass that on for generations! I'm so very sorry for your loss!

The services for Susan have not yet been added. Please sign up below to be notified when the services are ready.

The attached photos are added to the memorial of Susan Mary Hicks to help share their legacy.

Thank you for sharing your memory of Susan