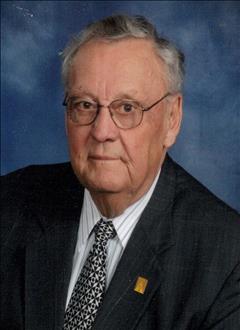 Funeral services will be held at 10:30 AM Monday, October 26, 2020 at Zion Lutheran Church in Humboldt, IA. Burial will be at 2:00 PM at Morgan Township Cemetery near Schleswig, IA with Rev. Merrill officiating. Military Rites will be presented by US Army Honor Guard. Visitation will be Sunday from 3:00 to 6:00 PM at Laufersweiler-Sievers Funeral Home in Fort Dodge, IA.

Harlow is survived by his daughter Kelly Sievers of Prairie Village, KS, by two granddaughters, Chandler (CJ) Pruneau and Paxton Pruneau, a brother Harold Sievers of The Villages, FL & a half-sister, Loween Getter of Webster City. He is also survived by his brother-in-law, Roger Schultz (Maria) of Sioux City, as well as many nieces and nephews. Harlow was preceded in death just 10 months ago by the love of his life, his wife of 61 years, Jolene.

Harlow Sievers was born on February 13, 1936 in Denison, IA, in the home of his grandparents, Emil & Rose Jaacks, who raised him as a youth. He graduated from 8th grade at Zion Lutheran School, Denison, and from Denison High School in 1954. In 1955, he entered the US Army, serving in Korea & the Far East. After his honorable discharge in 1957, he enrolled at Morningside College in Sioux City, IA.

On November 23, 1958, he was united in marriage to the former Jolene Schultz at Emmanuel Lutheran Church in Schleswig, IA. After their marriage they made their home in Sioux City, IA, later moving to St. Paul, MN. Harlow attended the University of Minnesota, graduating in 1960. After his graduation, they moved to Denison, IA, where he served his apprenticeship under Walter Huebner at the Huebner Funeral Home.

In 1974, he moved to Humboldt as Vice President of Crest-Pak, Inc. (now Liguria Foods). In 1975 he was named President & Chairman of the Board--a position he held until 1985 when the company was sold to John Morrell. It was during his tenure as president that he was awarded the Iowa Regional Business Man of the Year by the US Small Business Administration.

In 1987 he entered into a partnership with Joe Laufersweiler and they operated several funeral homes in Northwest Iowa. In 1998 he and Jolene retired and moved to Branson, MO, where he continued to remain active in the business as a board member and consultant.

Harlow would like to let you all know his work here is done, and he's answered a call we all knew he'd receive. He was one to face obstacles with ease and take chances in life...one of the most dangerous of all, allowing his granddaughter to drive his golf cart at a mere 5- years old!

He was a man of unwavering faith and commitment to family, and while his adventures and achievements in life could fill an epic novel, he will be remembered most by his storytelling ability and his ability to connect with anyone he met.

They say "It's not the years in your life, but the life in your years," but for Harlow it was both. He enjoyed a long life that was both adventurous and emotionally fulfilling & his stories will live with us forever.


Memorials may be left to family discretion.

2 people have supported the family by purchasing them flowers or gifts from the Healing Registry.

Kelly, We had so many great times with Harlow and Jolene during our years in Branson. We are so glad we were able to see him again and had a great time at dinner with him. Our deepest condolences. Walt and Joan Zimmermann

Kelly,
I was so sad to hear about your dad (and mom). It made me think of all of the times we spent together so long ago. Your mom and dad were great, and thought the world of you!
My thoughts are with you.
Vicki Mathey Tegethoff

You probably don't know me but my husband, Pat Hobart, thought the world and all of your parents. Please accept my sympathy on the death of your father and you and all his family will be remembered in my thoughts and prayers. Maureen

Dear Kelly, Chandler and Paxton. Our heartfelt sympathy to all of you at this difficult time. Harlow touched many hearts and lives and although it is hard to imagine the world without him, it is easy to imagine heaven rejoicing because he is there. Praying for you and asking God to hold you close. Karen and Marvin Andersen

He was the funeral director when my husband passed away here in Humboldt Iowa in 1997 he did such an awesome job and so caring. RIP you will be missed. Joyce Smith Carlson

The services for Harlow have not yet been added. Please sign up below to be notified when the services are ready.

The attached photos are added to the memorial of Harlow Sievers to help share their legacy.

Please help memorize Harlow Sievers by recording your attendance below.

Thank you for sharing your memory of Harlow