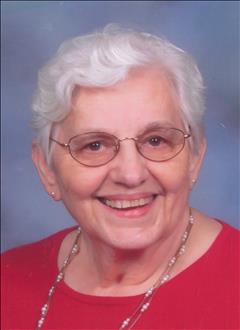 A Mass of Christian Burial will be 10:30 AM Tuesday, June 23, 2020, at Corpus Christi Church with Msgr. Kevin McCoy officiating. Burial will follow in Corpus Christi Cemetery. A visitation will be from 4:00 to 7:00 PM Monday at Laufersweiler Funeral Home.

Rita Mary Rolling was born on August 9, 1929, in Armstrong, Iowa. She was raised and educated in Bancroft. She graduated from St. John's High School and then attended St. Joseph Mercy School of Nursing. She was employed at Mercy and later Trinity Regional Hospital as one of the first ICU nurses. She retired in 1994 after working there for more than 30 years. In 1953 she was united in marriage to Wayne Beshey. They made their home in Fort Dodge, eventually working together to build a house just south of town. She was a member of Holy Trinity Parish.

The family would like to thank the staff of Unity Point Home Care, Villa Care, and Unity Point Hospice for their exceptional care.

Memorials may be left to the discretion of the family.

Someone has supported the family by purchasing them flowers or gifts from the Healing Registry.

So sorry to hear of Rita's passing. It brought back many memories of the interactions of our families. I especially remember the times spent with Rita when helping with the building of the family home. Probably the most time was when she and I were painting the exterior together. Our prayers and well wishes are with the family at this difficult time. Dale & Donna Hiveley

This was a loving cousin
Jensen kids

My sincere condolence to you Beshey kids. I have many fond memories of time spent at the Rolling farm when us Schmit clan cousins were growing up. Your mom and dad, Gene and Marcella used to come to Rockwell City a lot. There was never a bed in the house that wasn't short sheeted when they left. Great Lady!

My sincere condolences to the Beshey family on the loss of your beloved mother. May she rest in peace. It was always a pleasure to visit with Aunt Rita and all of you as family memories were created and we observed from all of our Aunts & Uncles what it is to be family. God Bless you all and in all ways.

Our deepest sympathy to the Rita Beshey family.

Our deepest sympathy to the Rita Beshey family.

The attached photos are added to the memorial of Rita Mary Beshey to help share their legacy.

Thank you for sharing your memory of Rita