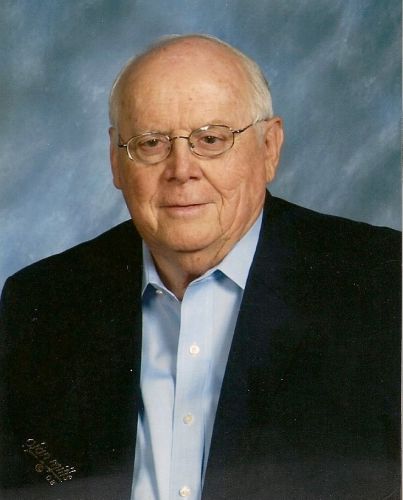 Thomas A. "Tom" McCarville, age 81, died June 11, 2015, after a brief illness. Tom is survived by his wife, Jean "Jeannie;" seven children: Ken (Pam) McCarville, John (Melanie) McCarville, Kirk (Beth) McCarville, Jeannine (Jay) Swartwout, Megan McCarville, Amy (Tony) Tutrone, and David (Judy) McCarville; four step-children whom he accepted as his own: Katie (Jeff) Krueger, Patrick (Mia) Maley, Christie (Scott) Davis, and Steven Mathews; 20 grandchildren, one great-grandchild, seven brothers and sisters, and numerous nieces and nephews.
Tom was born on September 19, 1933, in Fort Dodge, Iowa, the fifth boy of eight children, in the height of the depression, and grew up on a farm in nearby Moorland. He served in both the Marine Corps and the U.S. Army, and was a disabled veteran of the Korean War.
Tom attended Crieghton University in Omaha, Nebraska, and earned his doctorate in law from the University of Arizona. Tom practiced law in Pinal County, Arizona, for over 50 years. He was the kind of man that you could not help liking - congenial, outgoing, and always cordial. His practice involved criminal, civil, agricultural, water, commercial, banking, and real estate law. He represented many Arizona legends, both notorious and famous, including Frank Eyman (former Arizona State Prison Warden who in 1934 captured John Dillinger), the artist Ted DeGrazia, and many others. He wrote case law, had many law partners elected to superior court judge, and traveled to many countries while representing clients' interests. While practicing law, he also raised wheat, cotton, cattle, and kids. He has and deserves a reputation of competence and integrity, and is liked and respected by other lawyers and the judges before whom he has practiced. He is now presiding in a bigger courtroom.
Tom was a founding member of the Pinal County Veterans Memorial Foundation. He was closely involved in local politics, acting as city attorney for many Pinal County cities, including Eloy, Mammoth, Florence, Kearney, and Superior, and serving on the election committee of the first Hispanic governor of Arizona, Raul Hector Castro.
He served on the Eloy School Board, the Central Arizona College Foundation Board, the Bank of Casa Grande Board of Directors, Casa Grande Regional Medical Center Board, and the Board for the Casa Grande Valley Historical Society. He was also past Chairman of the Casa Grande United Way Fund Drive and was past Chairman of the Saguaro District of the Boy Scouts of America.
Tom was particularly proud that May 4th was proclaimed "Thomas McCarville Day" in Casa Grande, Arizona, by Mayor Robert M. Jackson in 2009. This was in recognition of and appreciation for all Tom has done for the people of Casa Grande.
In 2011, Tom and Jeannie moved to Florence, Oregon, where he enjoyed his men's Wednesday discussion group. He was active in the local VFW chapter, and volunteered with the Vets Helping Vets HQ organization.
A Funeral Mass will be held on Saturday, August 1, 2015, at 11:00 a.m. at Our Lady of Good Counsel Catholic Church, Moorland with burial following at the Moorland Cemetery. Laufersweiler-Sievers Funeral Home, Fort Dodge, Iowa, is handling the arrangements.
In lieu of flowers, memorial donations can be made to Chronic Care International Diabetes/Hypertension, 402-960-2217 or 402-250-6196, www.ChronicCareInternational.org.

There are no tributes yet.

We encourage you to show your support by adding a tribute above:

The attached photos are added to the memorial of Thomas A. McCarville to help share their legacy.

Please help memorize Thomas A. McCarville by recording your attendance below.

Thank you for sharing your memory of Thomas